What a completely oddball day… one show I initially dismissed before becoming mawkishly smitten with. One show that very very very nearly made me walk out and go home early… and one show that, had I succumbed to the aforementioned temptation, would’ve caused me to kick myself.

I put in my last order to FringeTIX today; the Schedule is now chockers. There’s not a single show on my Shortlist that I can fit in anywhere in the next ten days (well, that’s not strictly true – if I chose not to eat at all this Sunday, and all other shows run on-time, there’s another show I could catch at the TuxCat. And there’s one at midnight on Clipsal Saturday in The Garden I could catch, too… not bloody likely!)

A few other wacky bits for the day: Llysa rings me to tell me that Guy Masterson has name-dropped me (well, this blog, anyway) in the latest issue of The Adelaide Fix (Issue 7). Exciting! And this blog was also mentioned in a tweet from the Fringe office, too. And I happened to meet the ferociously talented Kym Begg, too (from last year’s Rough For Theatre II – “oh, you’re Pete the Festival Freak?”), and just discovered that this blog has been quoted on the ActNow Theatre for Social Change site. And these things make me grin, make me a little bit giddy; after all, I’m just a guy who sees a bunch of shows. And writes a little bit about, or around, or in spite of, them.

Grinning, I tell you. And only 39 shows behind in my show posts! ;)

And so we limp into the seventies – and there goes the Festival’s flagship. And what a stylish vessel it is, too.

The twisty turny convolutions I mentioned last night have been resolved… mostly. Sure, it’s not the best outcome I could have hoped for, but one I can still find some joy in. At least, that’s what the rational mind is telling me ;)

It’s all good, though! Picked up the penultimate batch of thirteen tickets from FringeTIX today, had a natter about the pros and cons of Zeitgeist, and successfully managed to be the most slobbishly-dressed person in the Festival Theatre this evening. Which I kinda revel in, actually; especially when there’s a surtitle that says “Thanks to all our sponsors and Angels.”

Blimey. Bit of a quiet one, today. Mind you, there was the best part of three hours of Shakespeare involved.

Talked to Guy Masterson outside the Queens Theatre this evening, who politely reminded me I’ve not seen any of the theatre on offer at Higher Ground yet… I really must do something to rectify that. Also chatted with Steve Sheehan during the Rhino Room Late Show (an unplanned excursion which did little to quell The Shortlist), which was nice :)

There’s more, but I’m not in a chatty mood. My brain’s starting to get in a slightly weird place, with twisty turny convolutions doing my head in. Very different from Fringe Burnout, though – thankfully.

…and with the onset of the Festival of the Arts, things start slowing down somewhat. Bigger shows, more awkward time investments.

I’m still a bit pissy that the Artist Talk associated with Shanghai Beauty was moved from the initially scheduled time (after tonight’s show). That was the only reason I chose this evening! Harrumph.

I found it quite ironic that I was spruiked for Drags Aloud whilst prominently holding the Shanghai Beauty programme, too. It’s the little things, eh?

Well here’s a surprise blog entry: I’m not drunk, and have managed to get home before midnight. ‘Twas a tough run, though, with sleep dep contributing mightily to the battles of the day… well, that and getting inadvertently hit in the face by one of the cleaning staff at the Norwood Food & Wine thingy.

A couple of notes that I’d not mentioned in the last couple of days: firstly, my favourite venue of the last couple of years, the Tuxedo Cat, will be losing its wonderful rooftop home after this year’s Fringe: the building is slated for demolition. My heart goes out to Bryan & Cass and the rest of the TuxCat crew – I loved that place (well, I still do love it, but… you know what I mean). Here’s hoping they can cultivate a similar venue elsewhere in 2011.

Saturday night led me to discover that Anniene was in town with her show, The Hamlet Apocalypse. Great talking to her again (or at all coherently, since our previous encounters have been of the inebriated variety).

Had a lovely little chat with Lili La Scala this arvo, too. She insisted that I “pull my finger out and write more.” Your wish is my command, Lili – tomorrow. Tonight is for sleep :)

Cor, what a great day. Even if I did miss the fireworks – described by a friend as “pretty damn spectacular” – I managed to see Megan Washington perform… twice. (The Grab Bag could well be a Festival winner, I reckon).

First show of the Festival tonight! And I’ve cracked fifty shows! How exciting :)

Any one of the shows listed below are great value, but I especially want to pick out Ro Campbell – he’s an absolutely fantastic comedian, and even repeat airings of some of his material still earned tears of laughter. Click here and buy a ticket to his show! :)

I tell you what, dear reader: I’m having the time of my life, here. I’ve had eight excellent shows in a row, had a load of laughs, some fantastic company, and am just really enjoying myself. I haven’t had as great a Fringe in many, many years :)

Day 13: unlucky for some. And by “some”, I mean “me”, because I spent about half the show on stage with Dr Brown this evening, wearing a crap wig or rubbing baby oil on a hairy, taut, mostly naked man. I’d be lying if I said the laughter and applause didn’t feel good, though.

Just looking at that list of today’s shows again, one thing sprang to mind – it’s pretty bloody good. Not a dud amongst them. Plus, I got to chat with Kate Skully, and tell Brad Oakes my 1998 Brad Oakes story… all the while fending off Nik Coppin’s wedding barbs.

It all made sense on the night, I swear.

Blimey. Today yielded a second – and unexplainable – scheduling error, resulting in me giving a ticket away (gasp!) and having to request a ticket stub for a TuxCat show off another patron. Oh, the depths to which I will plunge :}

It wasn’t a good idea seeing Controlled Falling Project so soon after Freefall; it just made me get grumpy at the crowd. But more on that later…

(…much, much later, at the rate things are going :}

Listen up, people: get in to see Freefall at Holden Street. Absolutely mesmerising and completely thrilling. Sure, they’ve got a season at the Ringbox in The Garden later on, but what they were able to do in the limited space of The Arch was stunning. Go on – here’s a link to FringeTIX.

Today was the first time this year that I started feeling dozy in some shows. Something to do with last night’s 2am drinking, one suspects. Still, imagine how pleased I was when I got home to find a can of Red Bull in my backpack (after I’d been unable to locate any in the vicinity of Holden Street).

Oh – seven unique shows yesterday. I can’t recall ever having managed that before. Four of them were absolute crackers, too. Blimey this is turning out to be a great Fringe :)

And that’s the good kind of pissed, not the angry kind.

That TuxCat run was incredible, though I fear my liver may hate me in later life. Shaggers had more cast than audience, but was fucking brilliant as a result. And tonight was supposed to be an early one – home by midnight, as I recall – and not a 2am drunken stumble. Once again, I blame someone other than myself :)

Blimey – bit of a nasty one today, wasn’t it? Mid-thirties, wandering around the Botanic Gardens on Gerda’s Journey again (decent crowd in, but the simpletons really had to work to have their voices heard above the wind – and the heat! Poor buggers). Then off to The Birdcage… ummmmm. Dunno whether that is going to be up for any Best Venue awards, but I’ll give them the benefit of the doubt for now.

So – approaching The Garden at 10:45pm. See a line that curves all the way half-way down East Terrace towards North Terrace. Wander to front of line, flash ticket, walk right in. Had a beer in my hand and was sitting with Irene on the Grassy Knoll arguing about Justin Hamilton within minutes :)

Well, after the giddy extremes of the last couple of days, it was inevitable that I was going to have a bit of a flatter day. Not so much in terms of shows, more of… the human side of things.

But that’s my fault for turning my back on the City on Fringe opening night. Believe it or not, I’m a shy and reserved chap who is not-so-fond of crowds, so the idea of facing the Fringe Parade crowd on a sticky Friday night just raised my grumpalump hackles immediately. Back into the fray tomorrow, though :)

So it was off to Holden Street for a treble today, dropping into The Gov on the way home. The Girl With The Gorgeous Eyes is back at Holden Street, so that’s nice :)

Today was the first day of my holidays, too – the first chance to pump out some show posts, catch up on some writing. Well, that was the plan, anyway. Two posts got done. This is beginning to feel a lot like the blog-swamp of 2009 :}

Today marks the first time ever that I’ve missed a show (that wasn’t cancelled). Sure, a large part of it was due to the fact that I’d left myself a scant five minutes to get from the Tuxedo Cat to the Bosco, and the TuxCat show ran about half-an-hour overtime, but it was mostly due to Irene. The little minx :)

Show your love for the Fringe and WIN!

We’re looking for the Biggest Adelaide Fringe Fan – are you it? Take a photo of yourself in Fringe wear or showing that you are a Fringe fanatic.

Now, I’m not usually one for FringeWear (in fact, just about the only Fringe-related clothing I’ve got is from the Edinburgh Fringe 2004 fashion line, and even that shrunk to such an extent that my man-boobs would be distractingly pronounced), so myself and my ex charted a different course: we decided to create a halo of Fringe tickets. Yes, I keep the stub of every ticket I can, and get very annoyed when I lose one.

So I dug out my collection of tickets from the 2000-to-2009 Fringes, and set about making a halo. 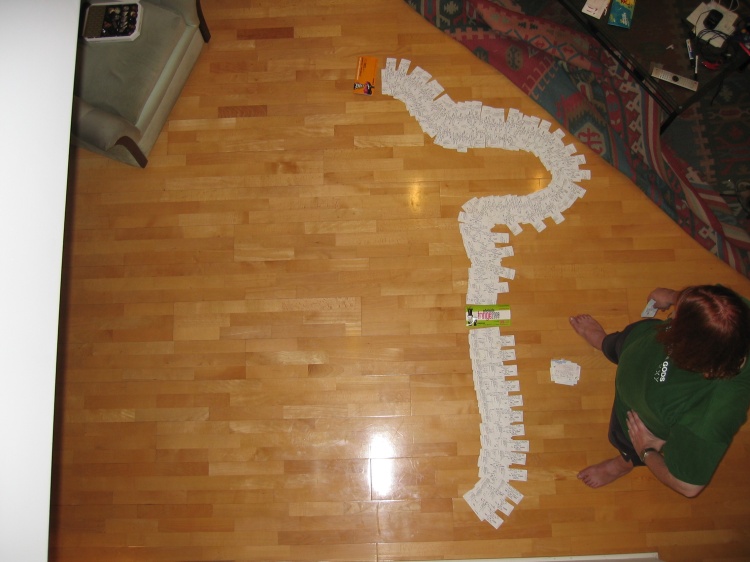 After using 2009 and 2007’s tickets, it became apparent that I wouldn’t be able to use all the tickets – lard-arse though I am, there simply wasn’t enough halo to fit them all in. Well that, and the ex (a notoriously early-to-bed lass) was fading quick. 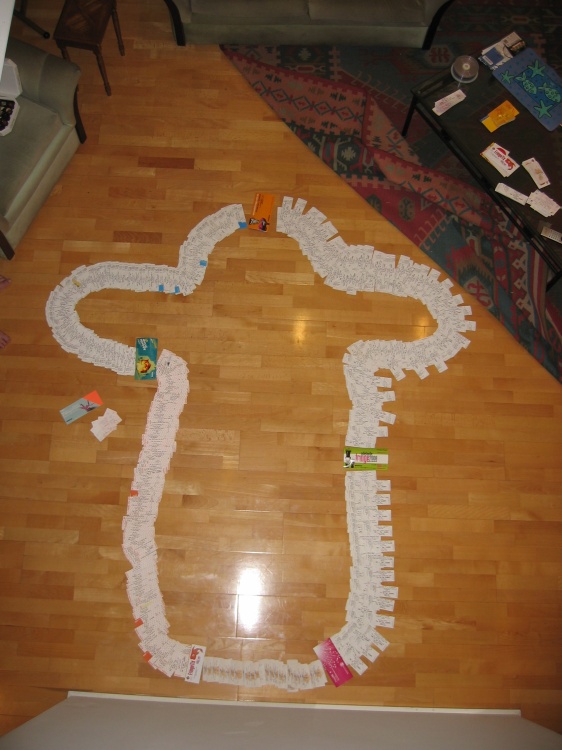 In the end, I sent off the following message and photo to the Fringe Buzz e-mail address…

Just got back from my first Fringe show of 2010 (Gerda’s Journey – ace :) and thought I’d better pop in a photo or four.

Higher-res versions of the photos are at the links below. 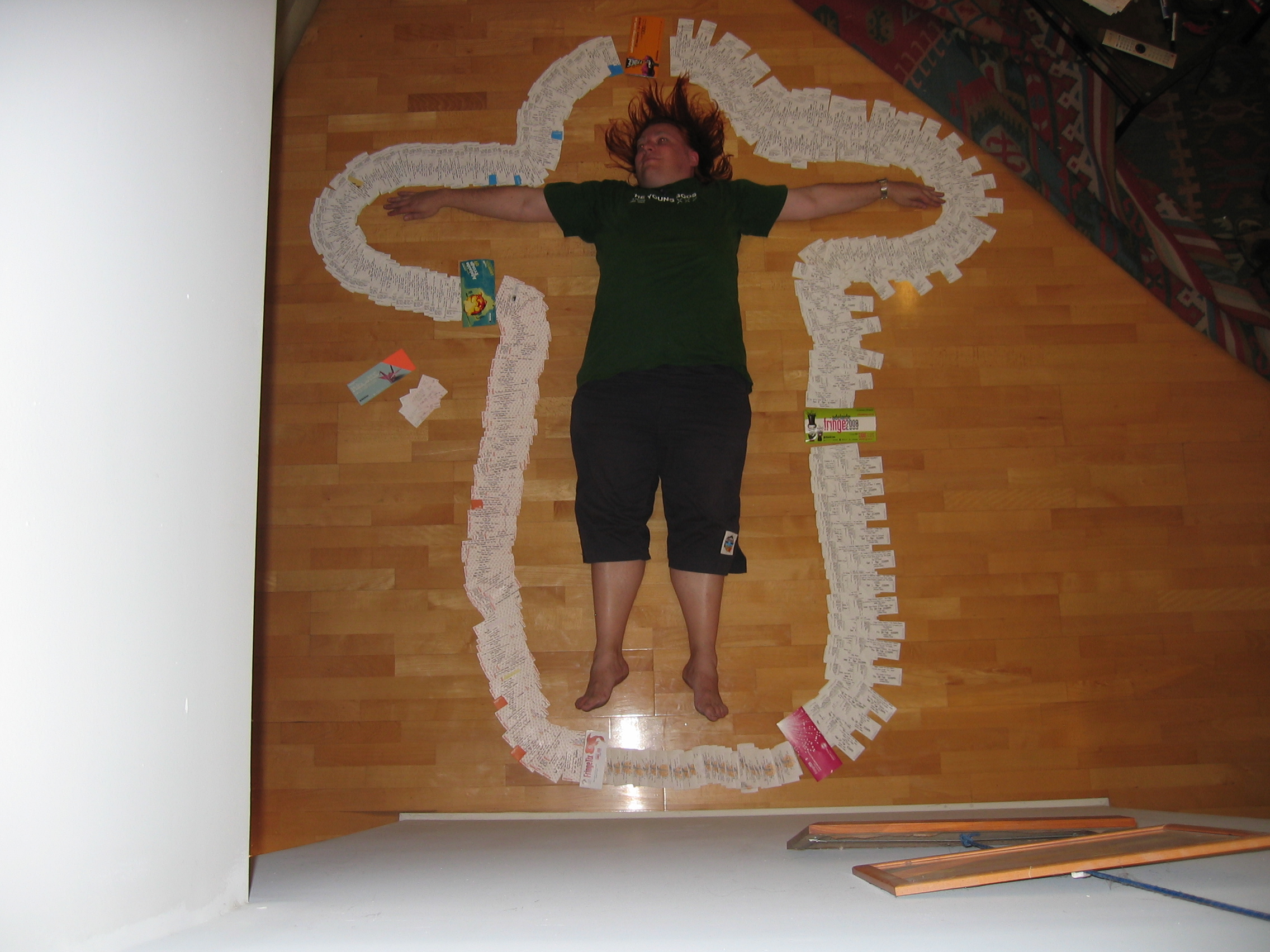 Irene’s idea for her photo totally would have beaten it, though ;)