Apparently, I’m a bit of a no-crowd magnet. Nothing else would explain the lack of people at a whole bunch of shows that I’ve been to. The two of us that were waiting for admittance to the show (joined by a solitary – but enthusiastic – latecomer) were greeted at the door by Tomás – scrawny, disheveled, and sporting a bruised face and massive black eye. Considering the warnings I’d been given by one of the volunteers at Freemasons (who claimed to have seen a Tomás Ford self-destruction set at the Fringe Club), this was only mildly unexpected.

The Cabaret Of Death is very much a one-man-show. Accompanied by a laptop-powered musical backing, Ford prowls the stage belting out both original and cover tunes. He hands out bottles of bubbles and party poppers; he trashes the stage; he serenades his audience of three; he stalks the length of the room; he croons demurely in a foetal position. Make no mistake, this is an act of beautifully weighted contrasts. 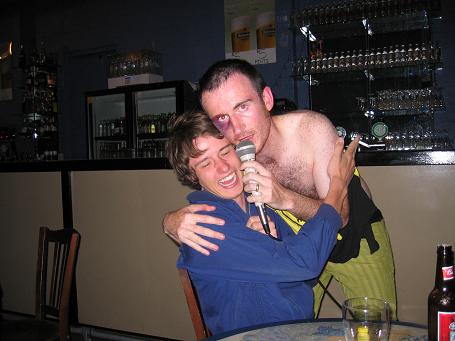 His music, hacked together with a PC-based sequencer, sounds like cheap and dirty 4-track techno; but it’s good, and demonstrates that Ford has all the pop-sensibilities of Reznor, but without the sell-out teen angst… he replaces that with a keen eye and ear, cleverly constructed lyrical insights into the everyday that are at once caustic and cozy. It sounds like an early industrial pioneer experimenting with bubblegum pop, whilst getting a Tourettes-ridden Eels vox overdub. Or something. It’s bloody good fun, anyway.

That Ford manages to turn Radiohead’s “Creep” into an even more disturbing torch song (rather than the usual ironic crap that other performers seem happy to create) is testament to this man’s commitment to his art. Tomás Ford’s Cabaret Of Death is unsettling, disturbing, and utterly compelling.

Tomás has some songs available on MySpace and Download.com – which is a great cue for everyone to tell me how wrong I am.