Elbow Room @ a shipping container at the back of The Garden

Under a giant grey gum tree, glowing eerily blue by a spot light, lies a shipping container: white placards, framed by red curtains, proclaim the show contained therein: “There.” After the (surprisingly massive) crowds gathered for A Company of Strangers files into the Spiegeltent, the area in front of the shipping container looks barren, the few people waiting for the show forlorn and looking with concern at the black curtains covering the entrance, wondering what they were spending their $17 on. 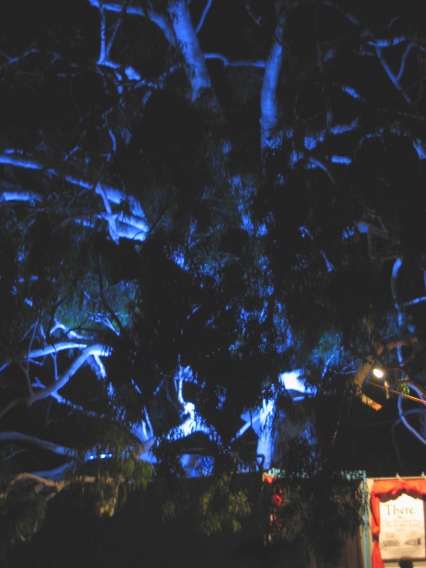 It looked spookier when I took it.

The curtain parts, and we file in. There’s only room for about 30 people in the container, and there’s plenty of noise bleed from the Spiegeltent and the throng outside. The lights dim, and at the far end of the container we see Angus Grant & Emily Tomlins appear, clad in desperately unflattering black tights. Using small penlights, they illuminate their hands, enacting a voyage of discovery as their walking fingers explore their small initial space, before roaming further to reveal arms, shoulders, and eventually the performers themselves – who then evolve before us to discover voice, emotion, before tumbling into more conventional theatre.

The first ten minutes with the fingers (not really “finger puppets” per se, but it’s still a pretty good term that gets the point across) are both a delight in their projected innocence, and a concern for the money that you’ve pissed away on the ticket – there’s an undercurrent of amateurism in this opening segment, but that may actually contribute to the charm. But when the “evolution” occurs, with the spotlight essentially zooming out from the fingers to encompass the entire performer, we’re back into familiar territory – abstract themes, and bold, brassy, pompous words and tones that typify much of the avant garde Fringe theatre. But then the fourth wall comes down, and Grant & Tomlins are roaming (inasmuch as that’s possible in the confines of the shipping container) the audience, reading their minds in a cacophony of words – before stark realisation, panicked looks, and a return to the finger-puppets; devolution, death.

“Yes, that’s awesome, Pete,” you say, mildly interested; “but is it any good?”

Well, yes. Yes it is. Aside from that scare in the first couple of minutes (when you suspect that you may be watching nowt but fingers for 40 minutes), it’s really quite an absorbing piece. The central act – The Good Story – maybe carries on a bit long, but that’s acceptable given the opportunities it provides for further… ummm… hijinks. I’d say “plot development”, but that feels misleading. But by all means, do consider this show as an avenue for your Fringe-dollars; it’s thought-provoking, it’s clever, it’s suitable oddball – hey, it’s classic Fringe. But if you do want to see There., try to catch the earlier show (and maybe a weeknight session, too) – the noise bleed can be a bit offputting.